Brock took the Yukon back to the repair shop right on time this morning and they were kind enough to bring him back to the campground so he could wait with us since it was a small shop and they didn't really have a waiting area. The sensor replacement went as expected and the bill was what they quoted, which wasn't too bad and they came back and picked Brock up so he could go pay the bill and when he got back from the shop with the Yukon, we all hopped in and headed for the Park.

It was a little after 10 am which wasn't as early as we would have liked since the temperatures were already in the 80's, but we were just glad to get to be seeing Arches which was one of the items on my "list" since the beginning of the trip.

We followed our same strategy, not stopping at any of the pullouts until we got to the area with the Delicate Arch. We all got out and grabbed a water bottle, put on some sunscreen, and headed out on a moderately strenuous hike, 1.5 miles each way to get a close view of one of the most famous sights in the Park. 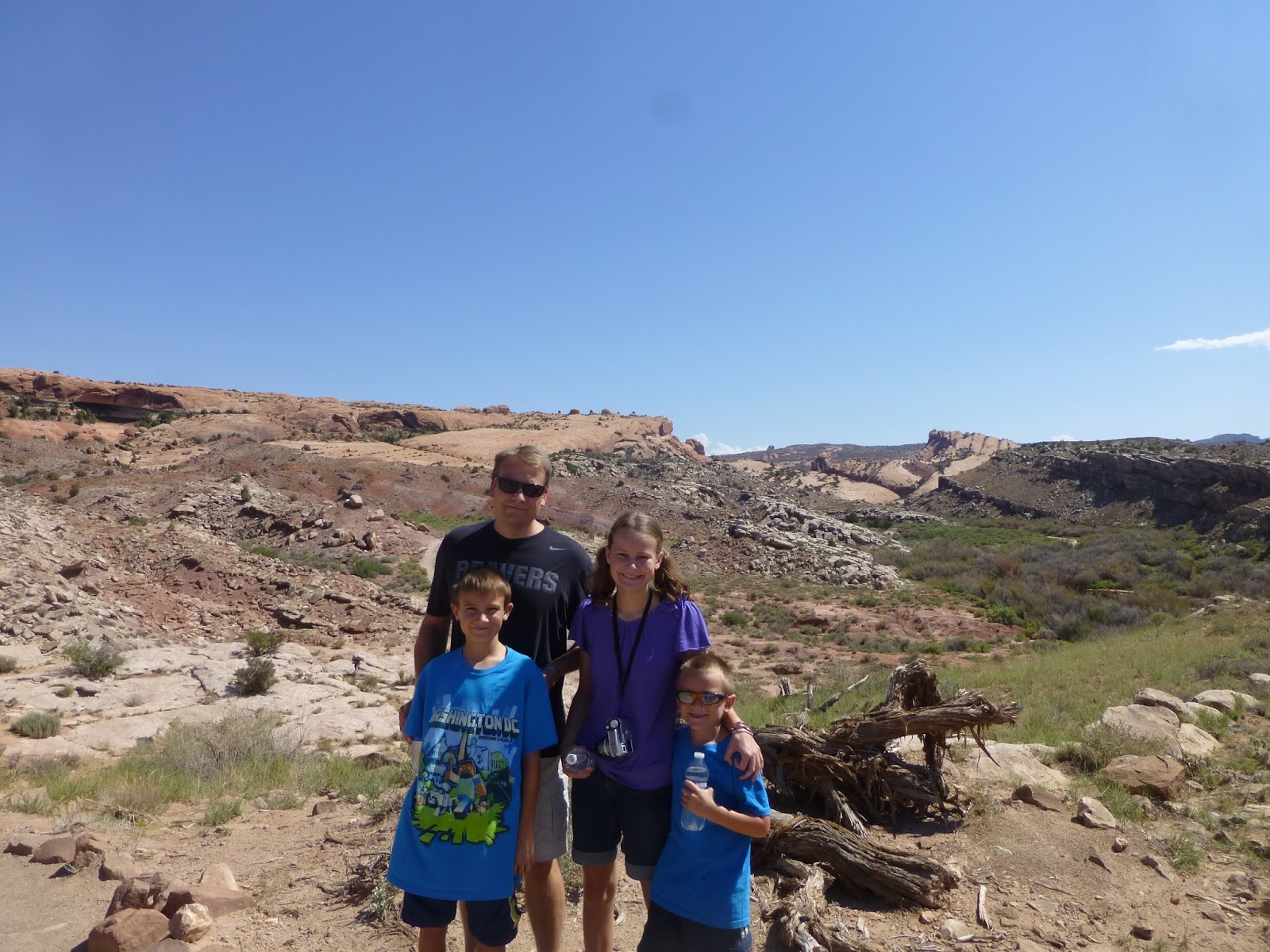 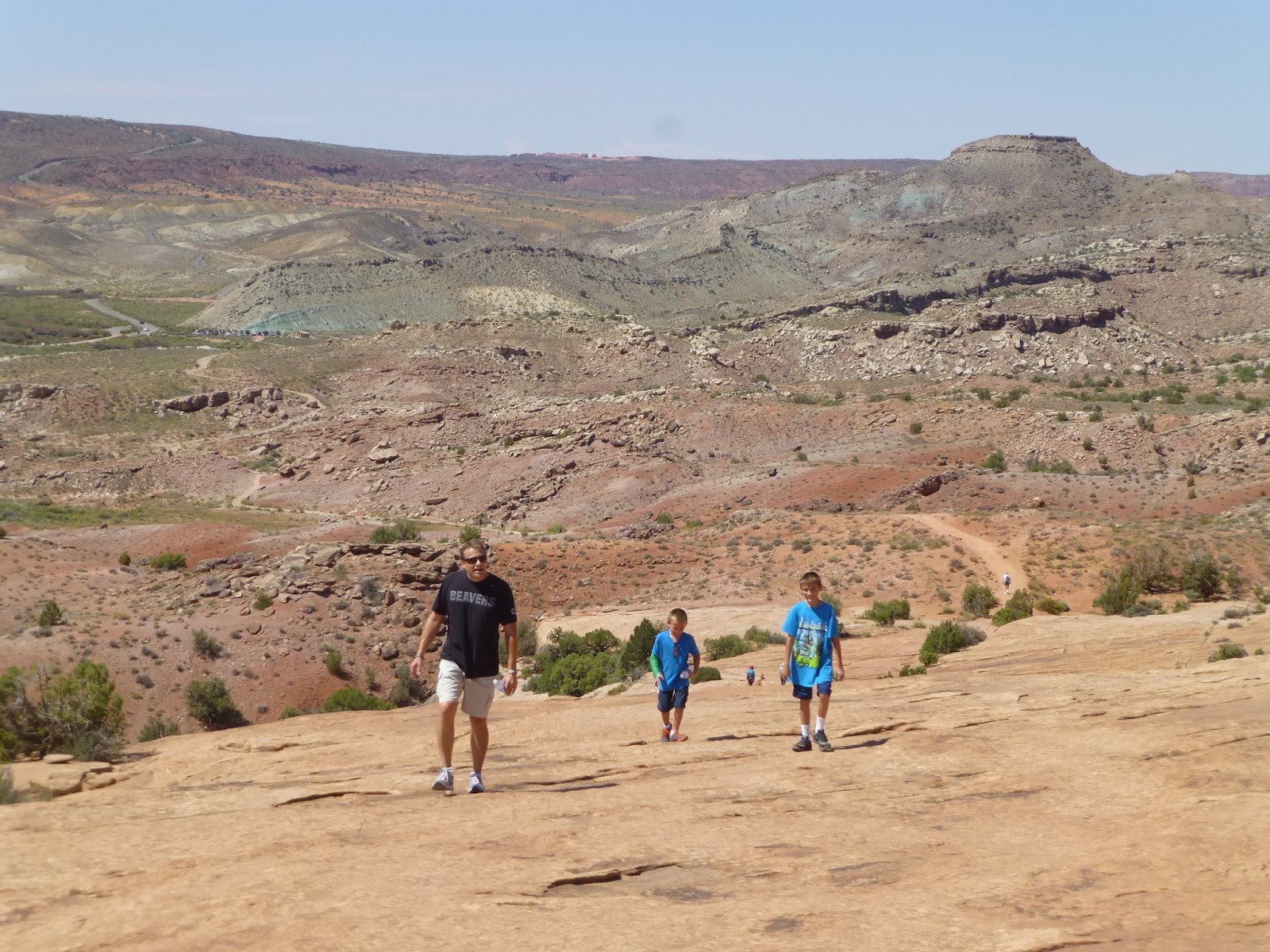 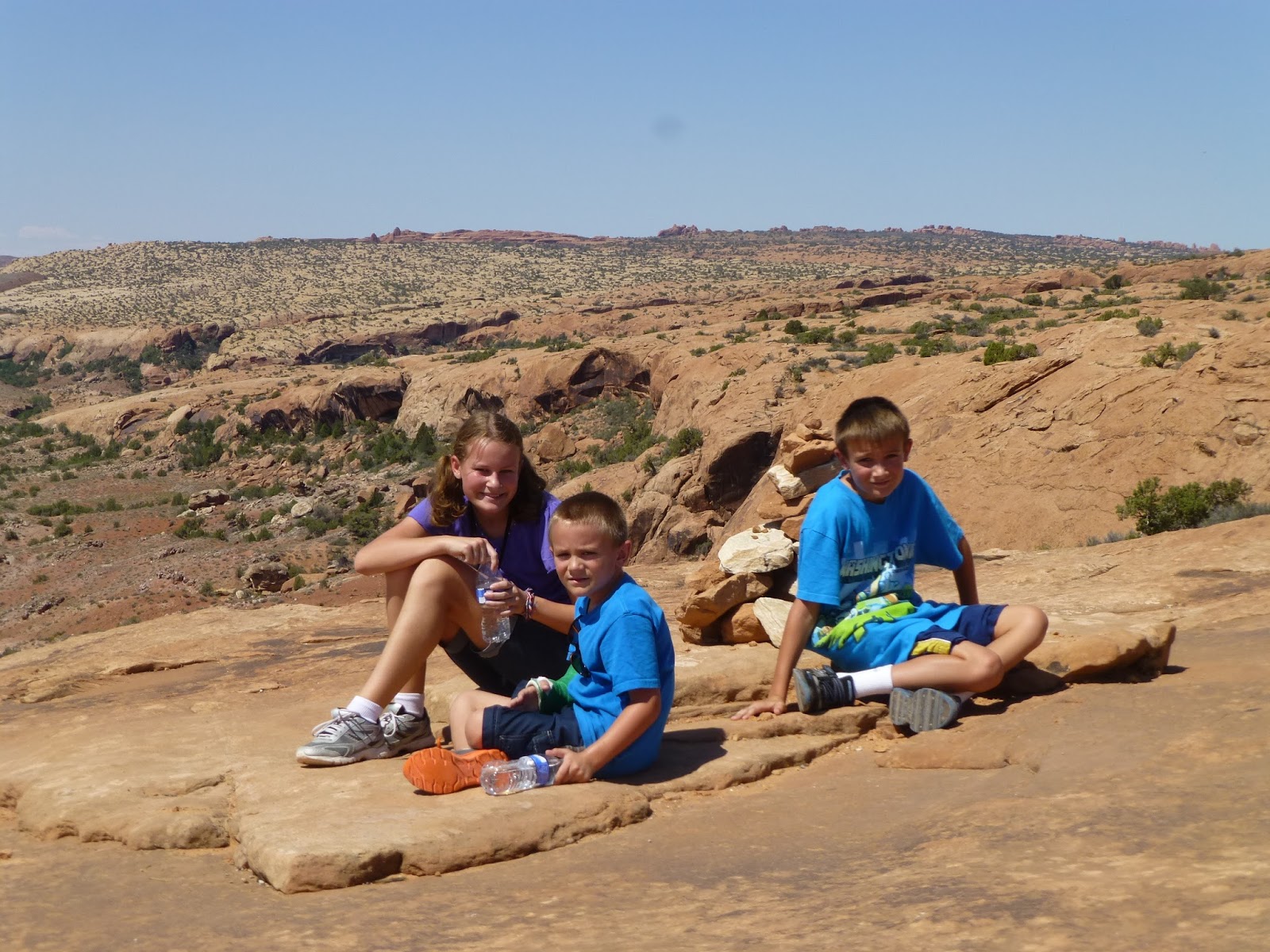 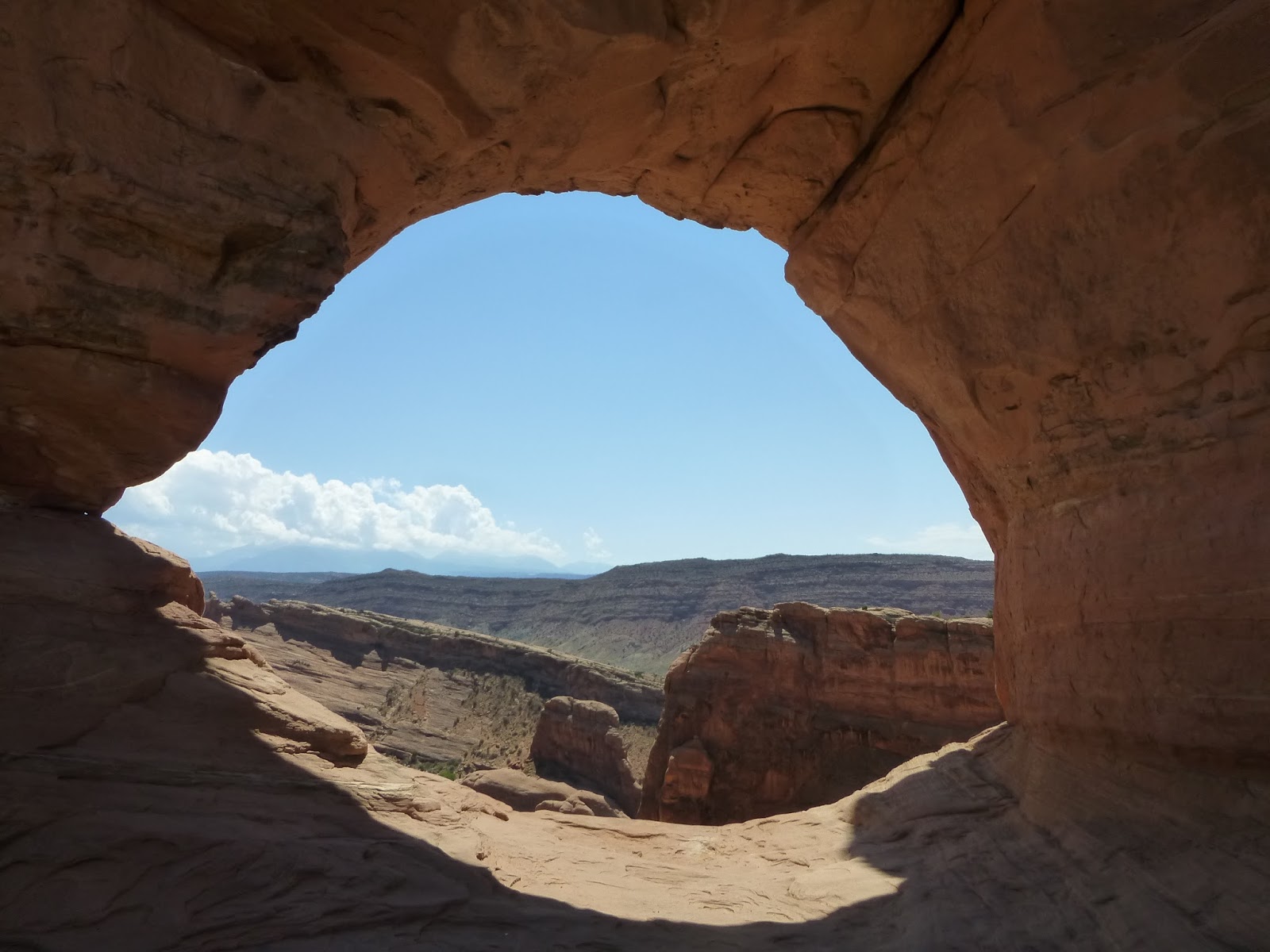 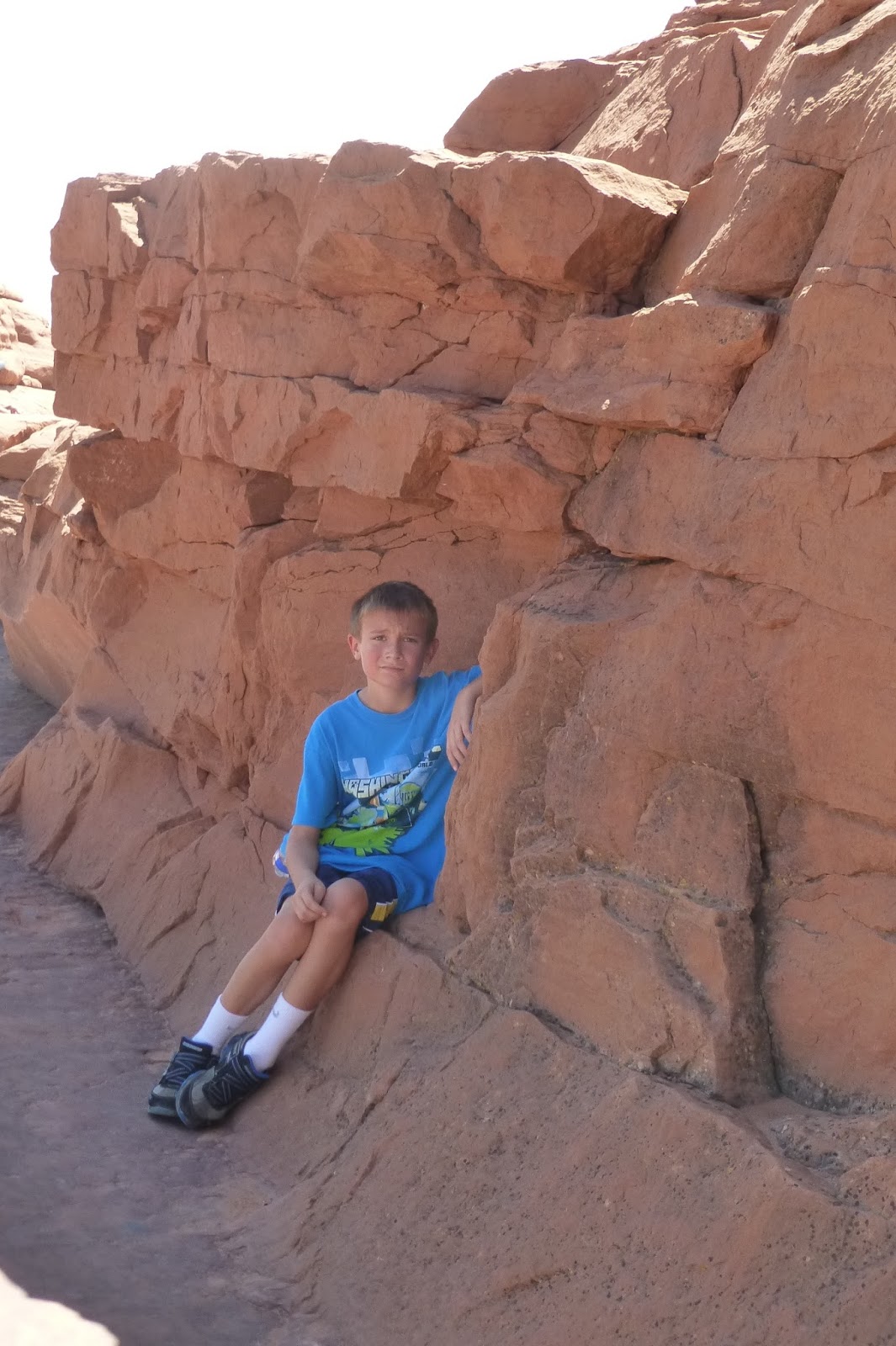 It was challenging for us since most of the way there was uphill and it was pretty hot, but everyone did pretty well. I was proud of the kids.

When we got to the Arch, we took a bunch of pictures. Brynna and Spencer decided to hang back a little on a flatter area and Brock and Brighton, Skylar and I headed on a sloped area to get a closer look. Skylar accidentally let go of his water bottle and it rolled down, down, down into a bowl. Brock and Brighton looked for a way down to go get it, not to try to save the water which had all spilled out, but so that we wouldn't be litterbugs. It didn't seem like there was a very safe way down from where we were so the guys decided to look for a way around from the other side when we were on our way down. Thankfully, I had really rationed my water and had enough to share with Skylar for the way back because he seemed to need it more than I did. 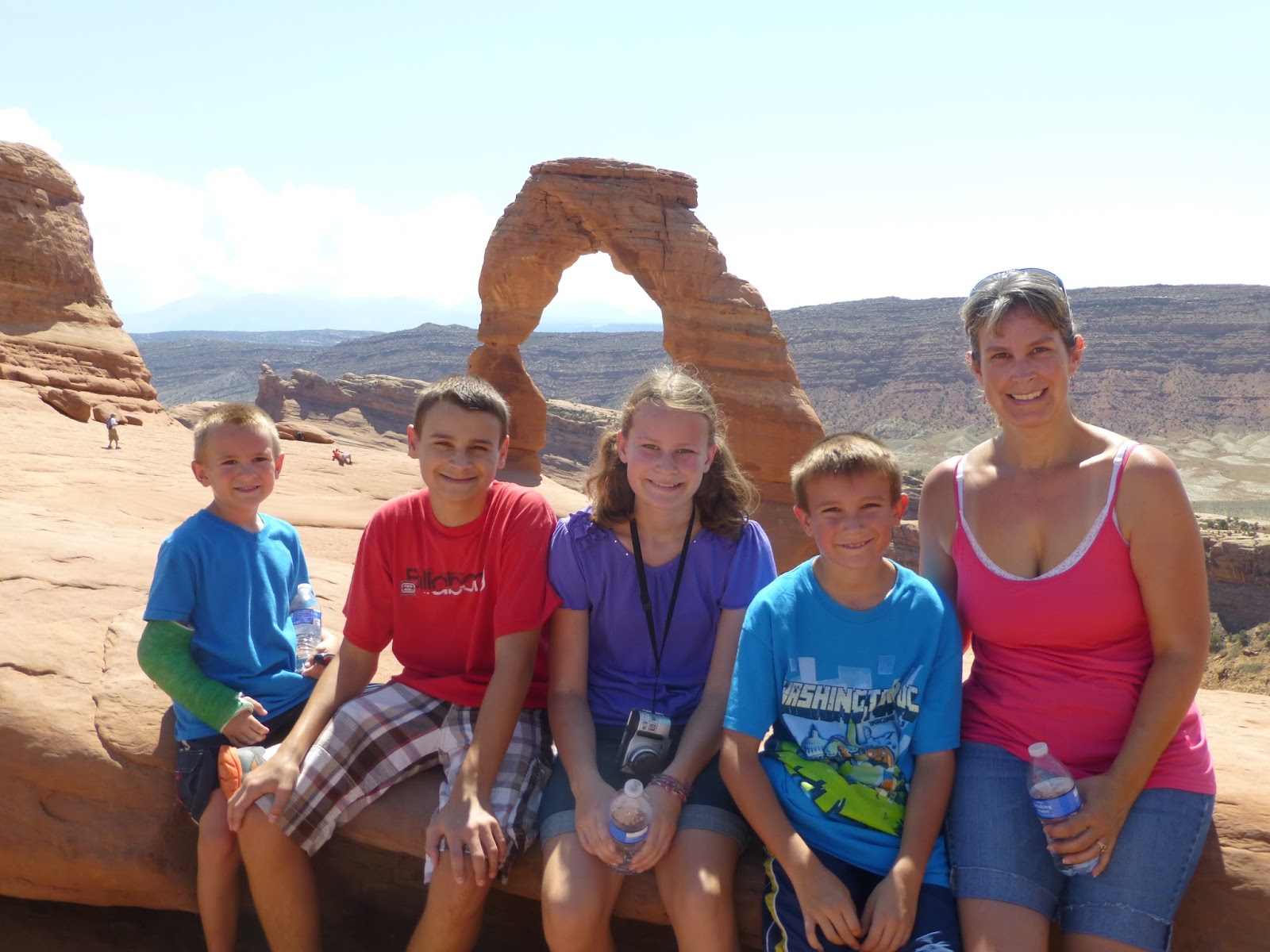 Brock and Brighton were able to successfully climb down into that bowl from the other side of it. They retrieved Sky's water bottle and saw that his wasn't the only one that had made its way down there. They grabbed another one that wasn't in the bushes (they were a little concerned about snakes) and met us towards the end of the trail back. We'd stopped to talk with a very nice couple that were celebrating their anniversary this week and so Brock and Brighton were able to catch up to us. They'd gotten a picture with Brock's phone of the Delicate Arch from the bowl side. 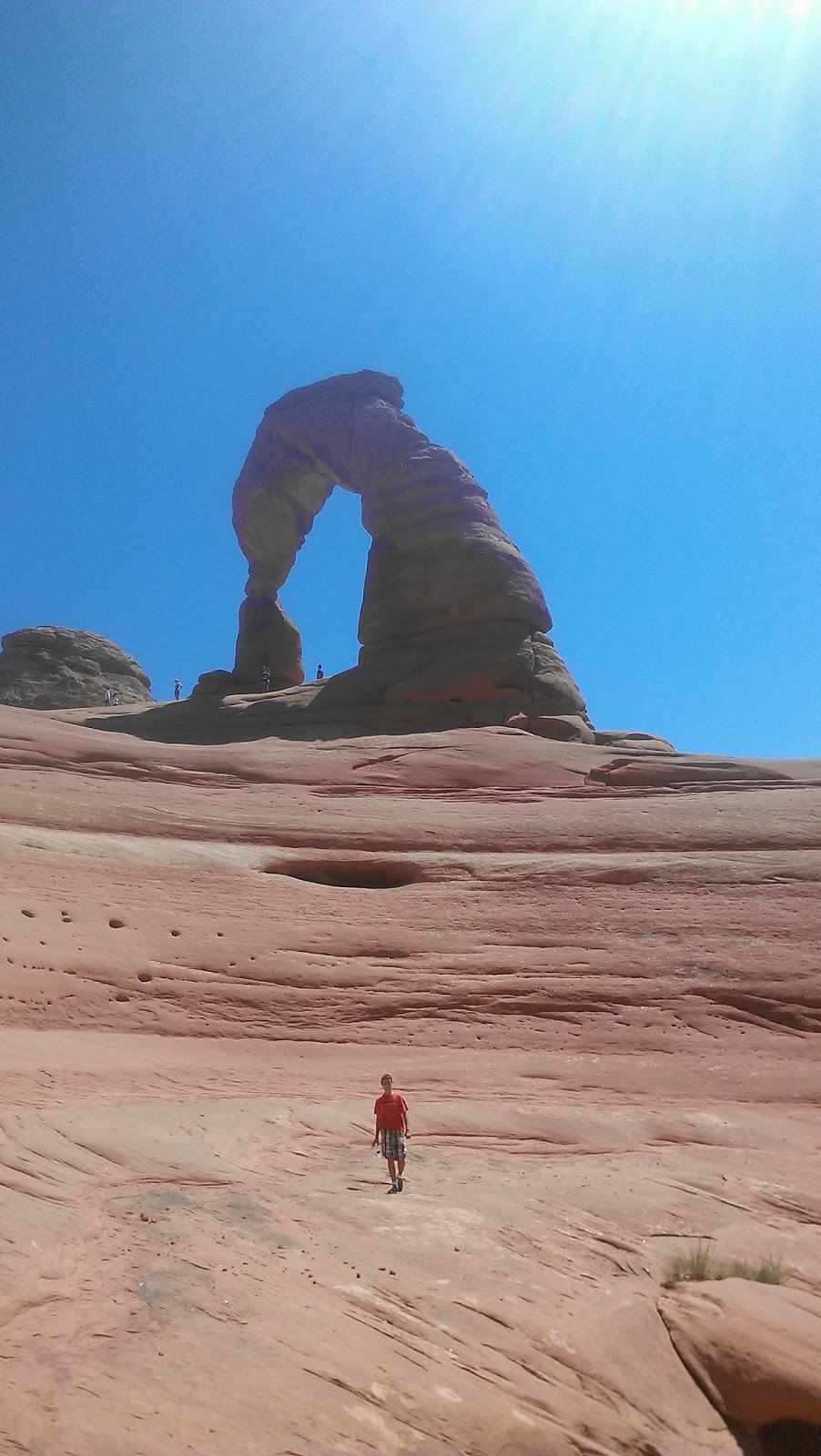 We got back to the parking area pretty tired, sweaty and thirsty. Thankfully we could all grab a second water bottle from the cooler. Those got sucked down pretty quickly too. We had some snacks and continued our drive a little further down the park road to the end where there is a campground that smaller rv's and tents can stay at, as well as some pretty awesome rock structures in an area called Devil's Garden. 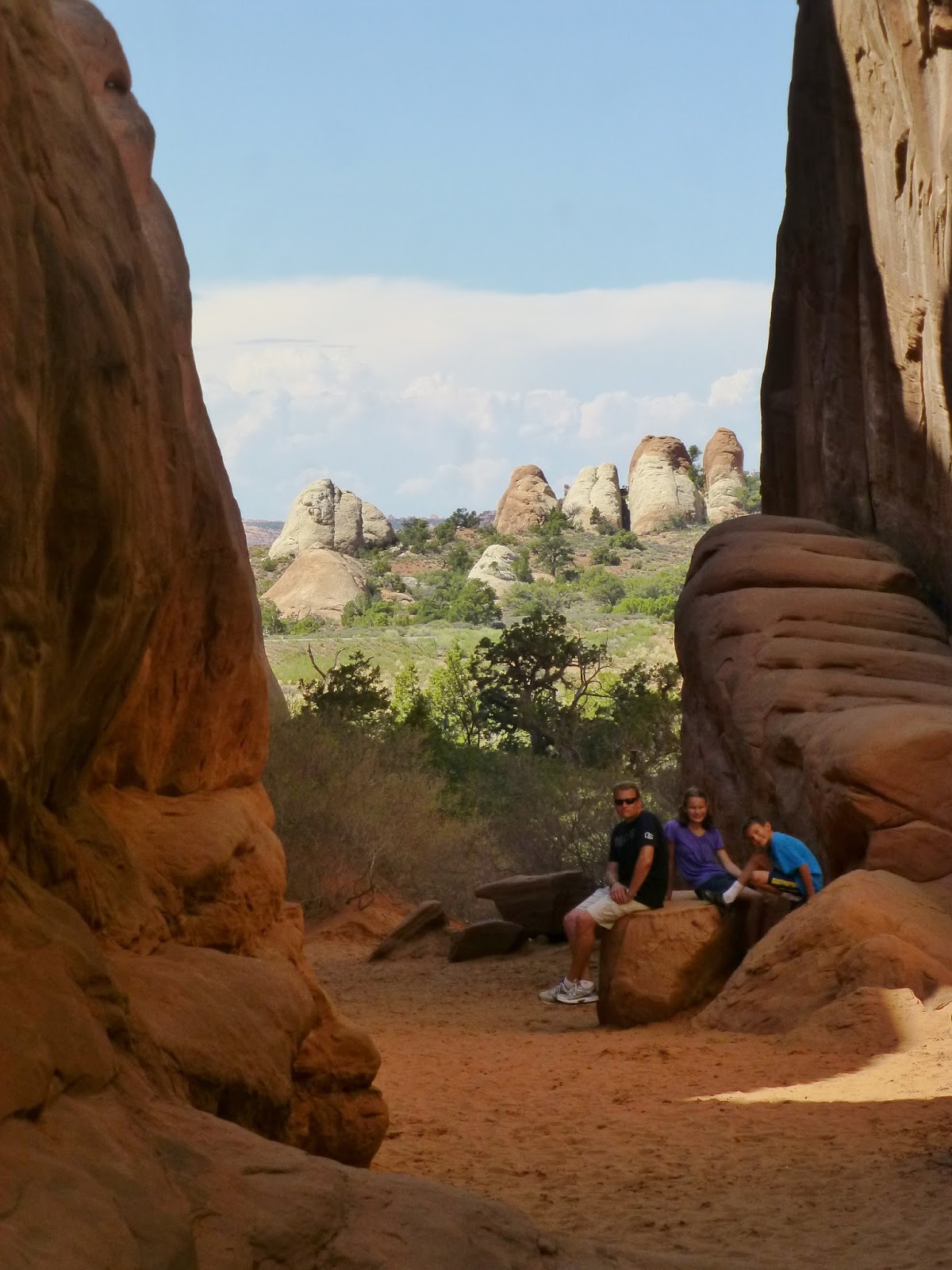 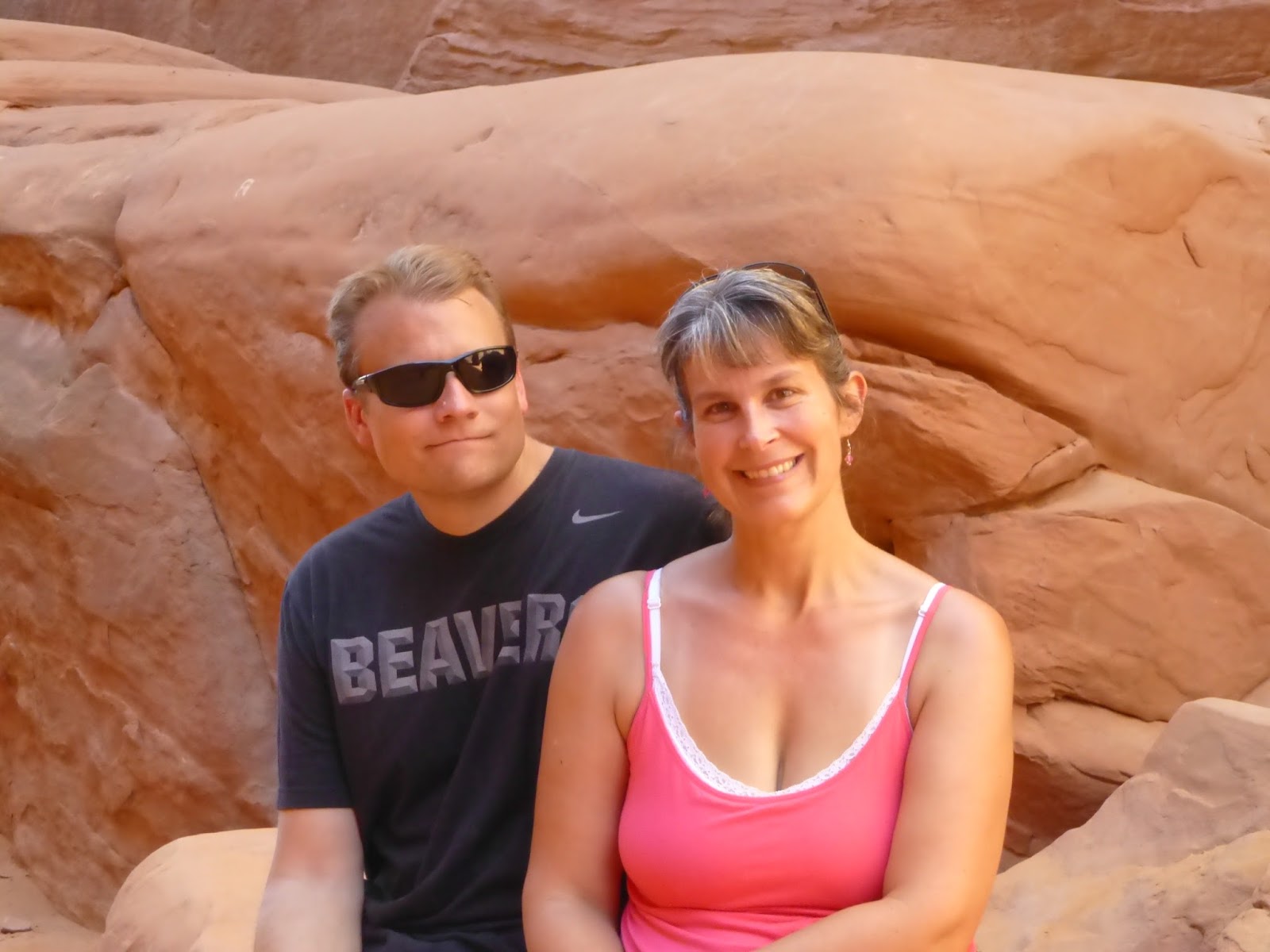 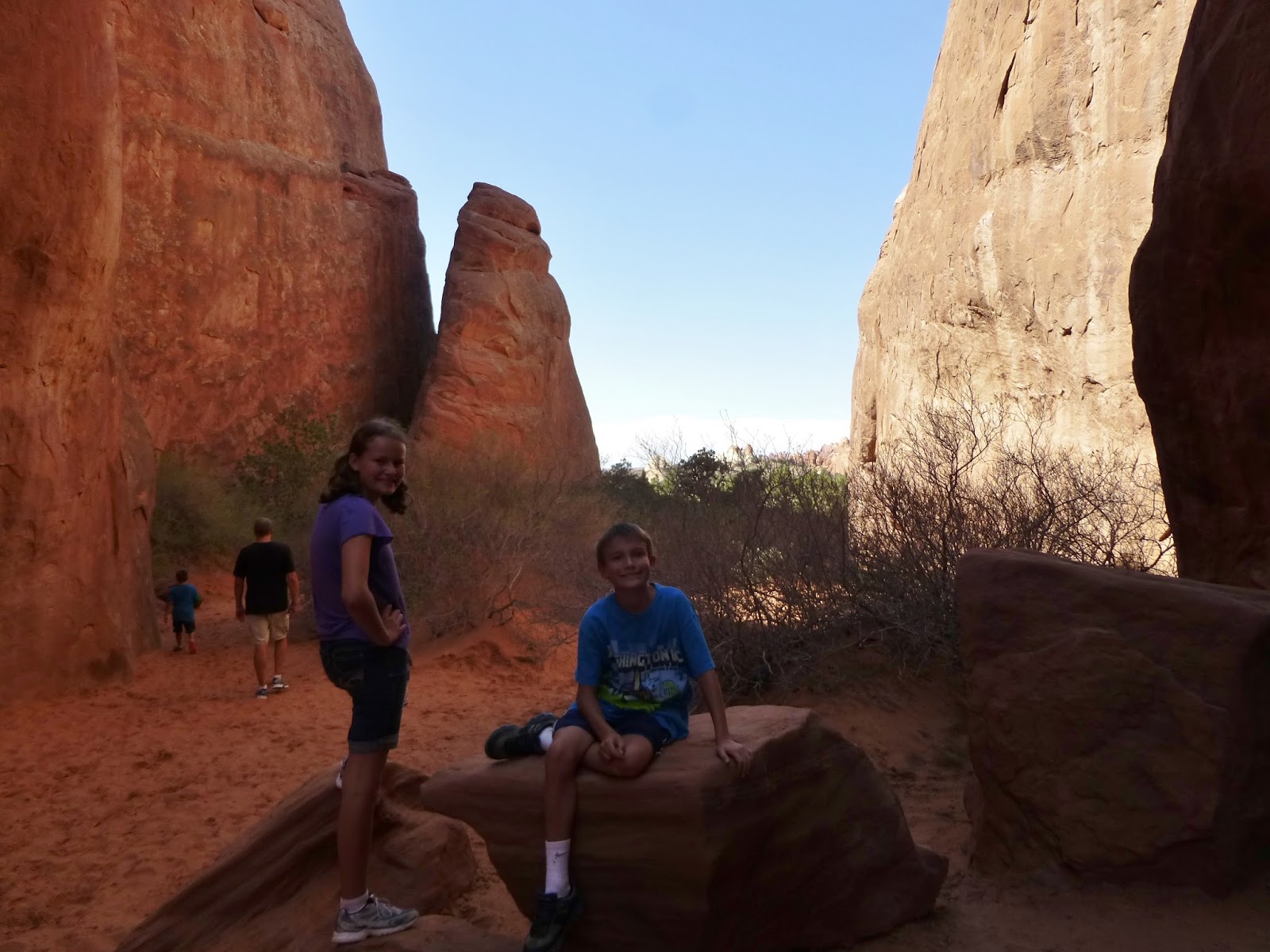 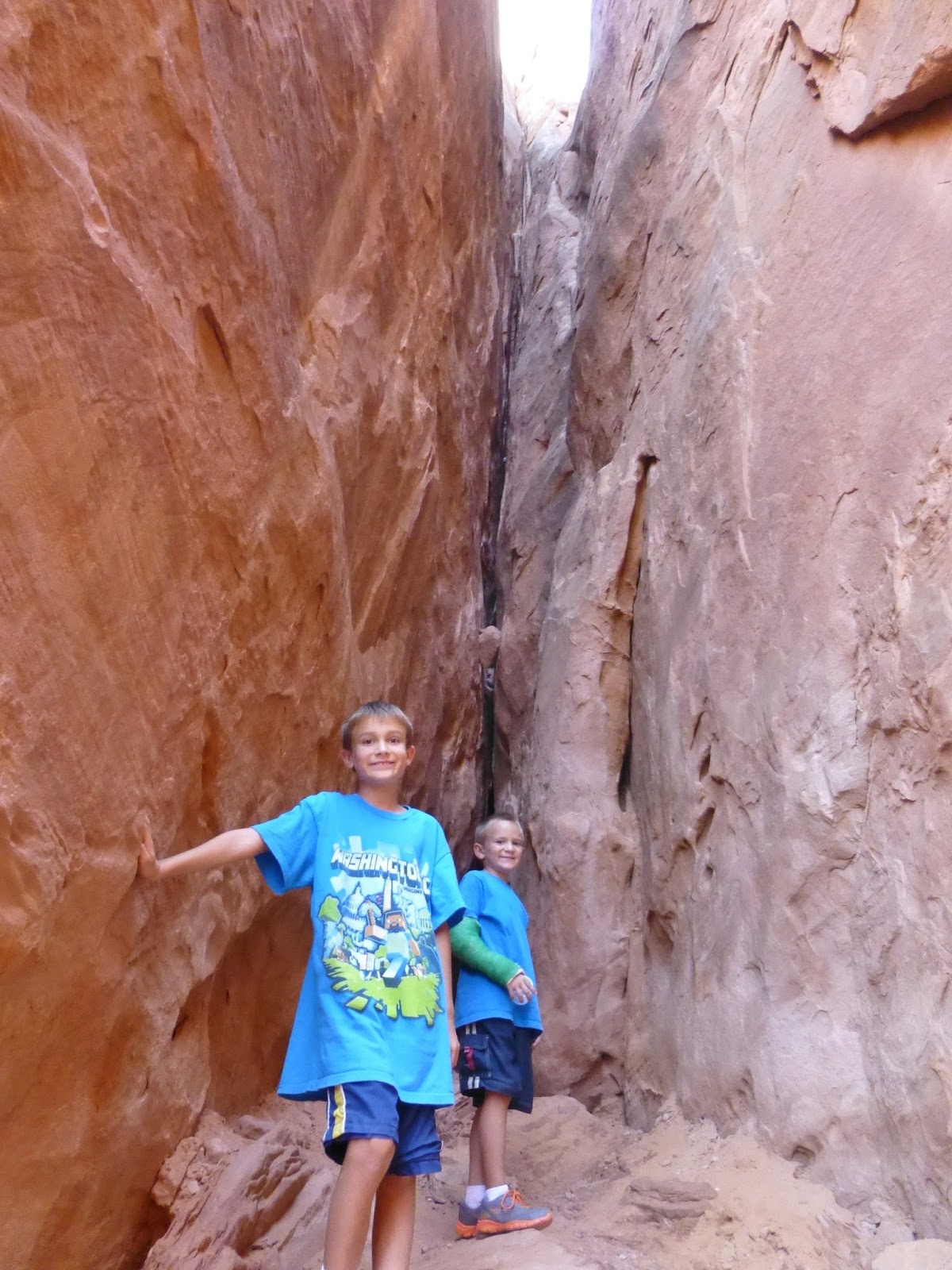 From here, we started our drive back the way we'd come and stopped wherever we wanted for pictures. Nobody was much in the mood for more hiking so we didn't get as close to some of the photo ops as I would've liked, but it sure was an awesome day! 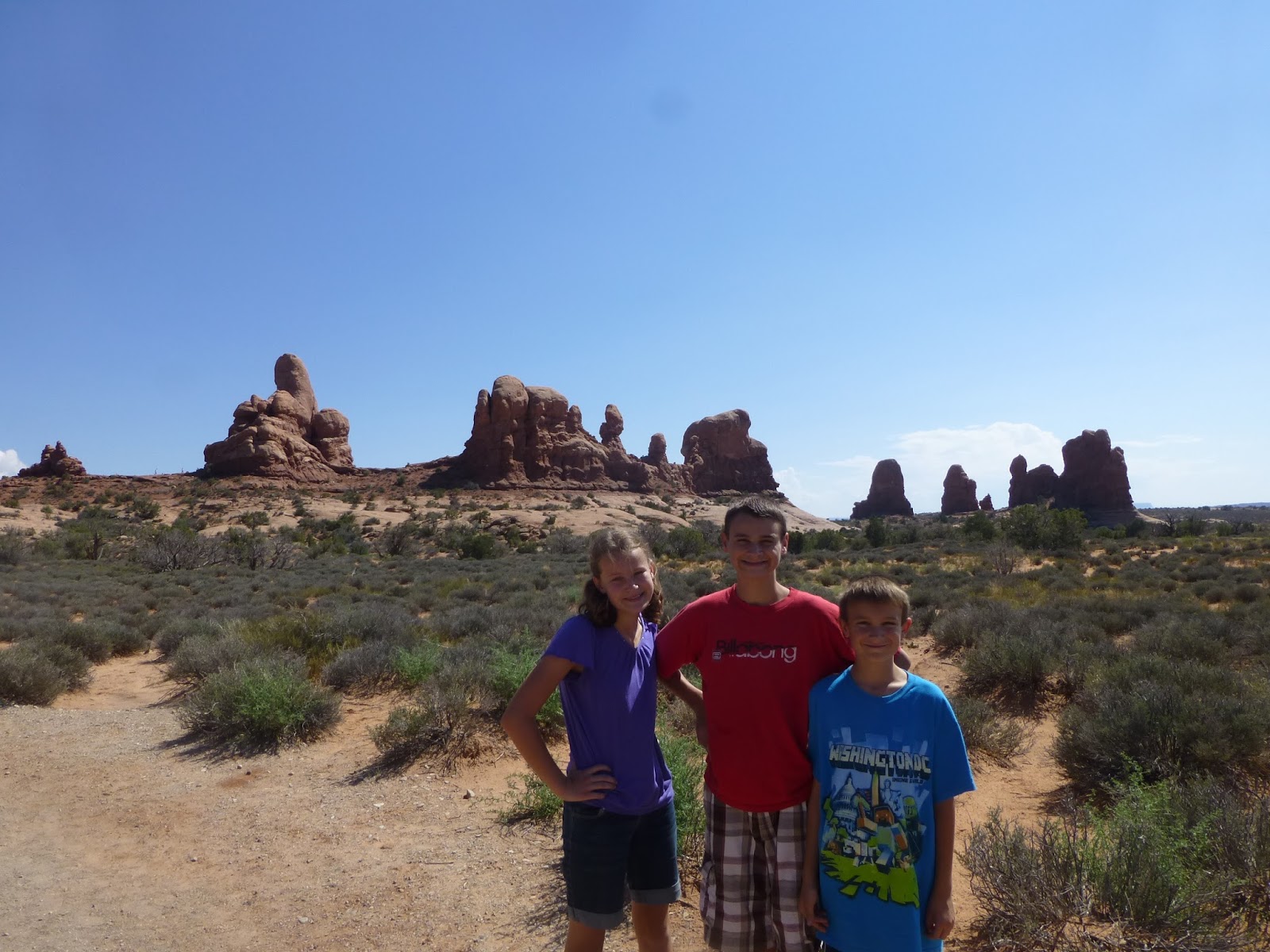 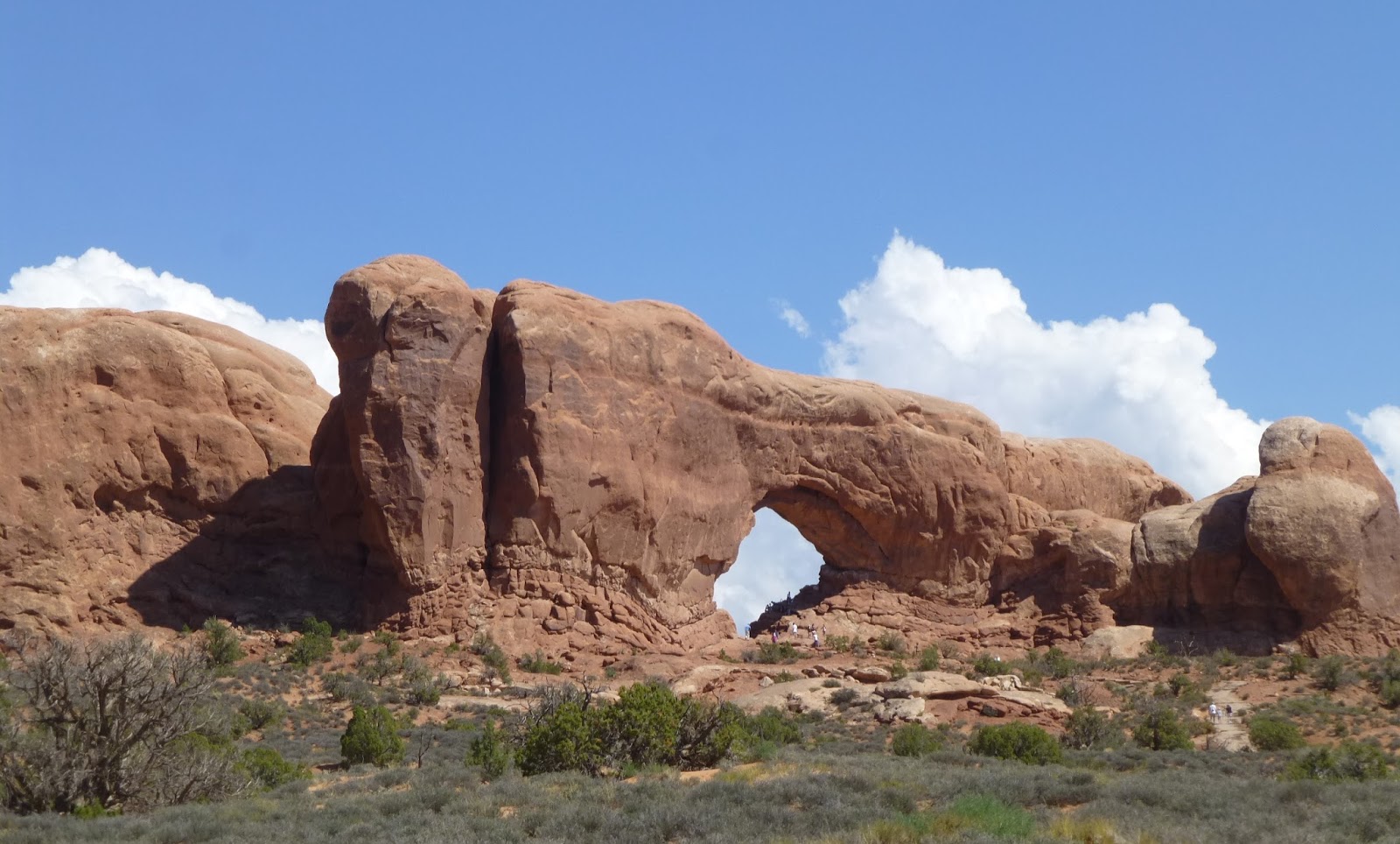 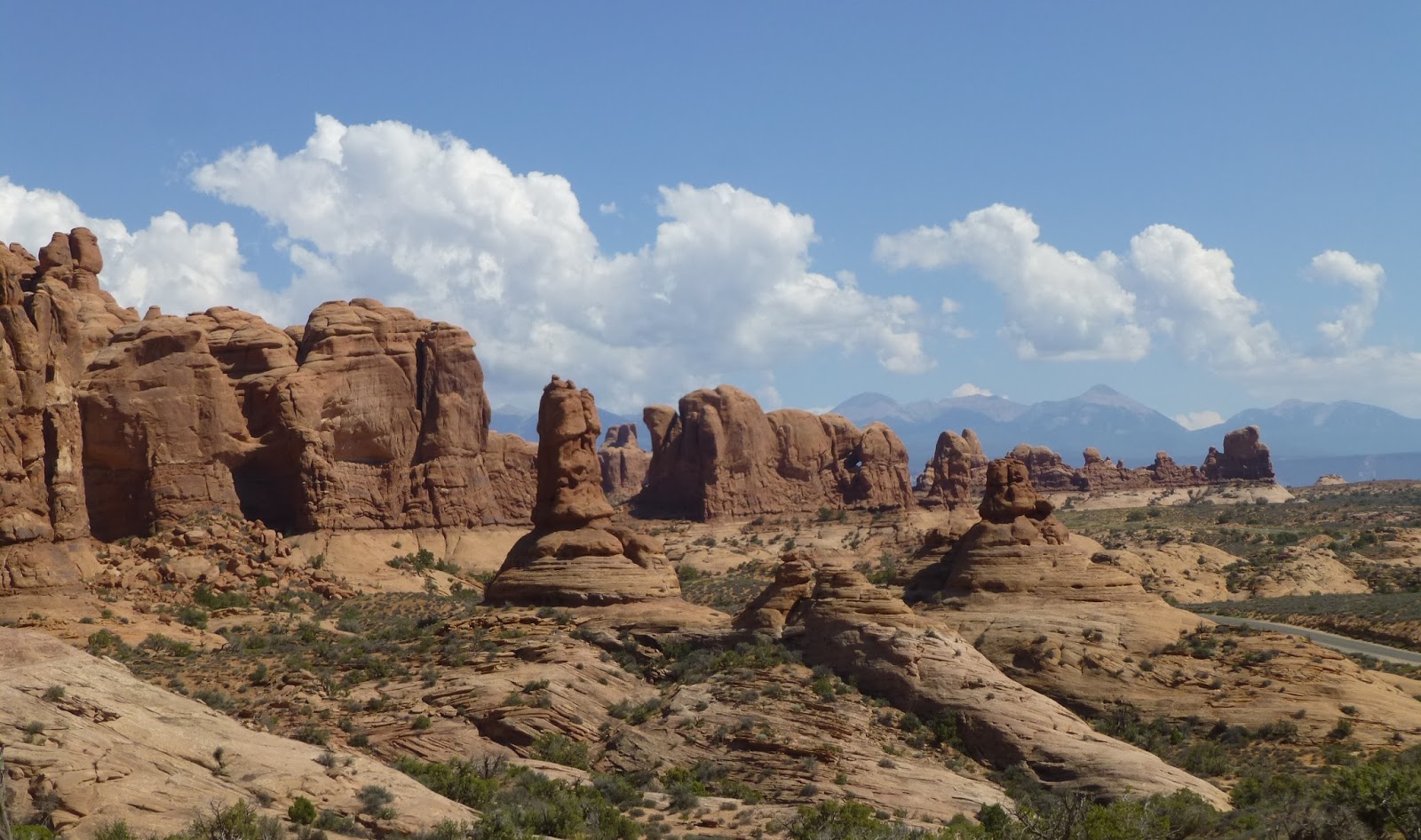 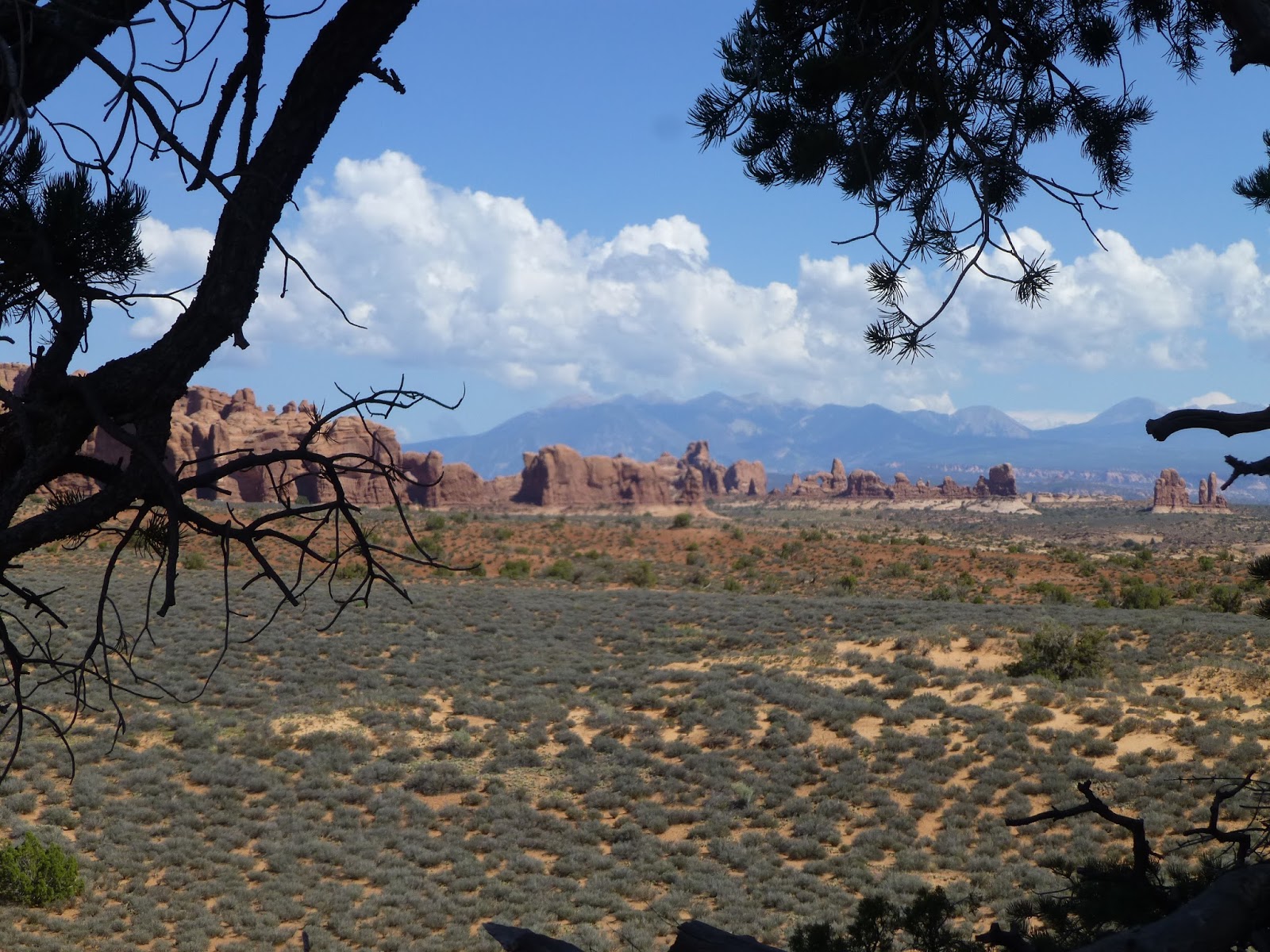 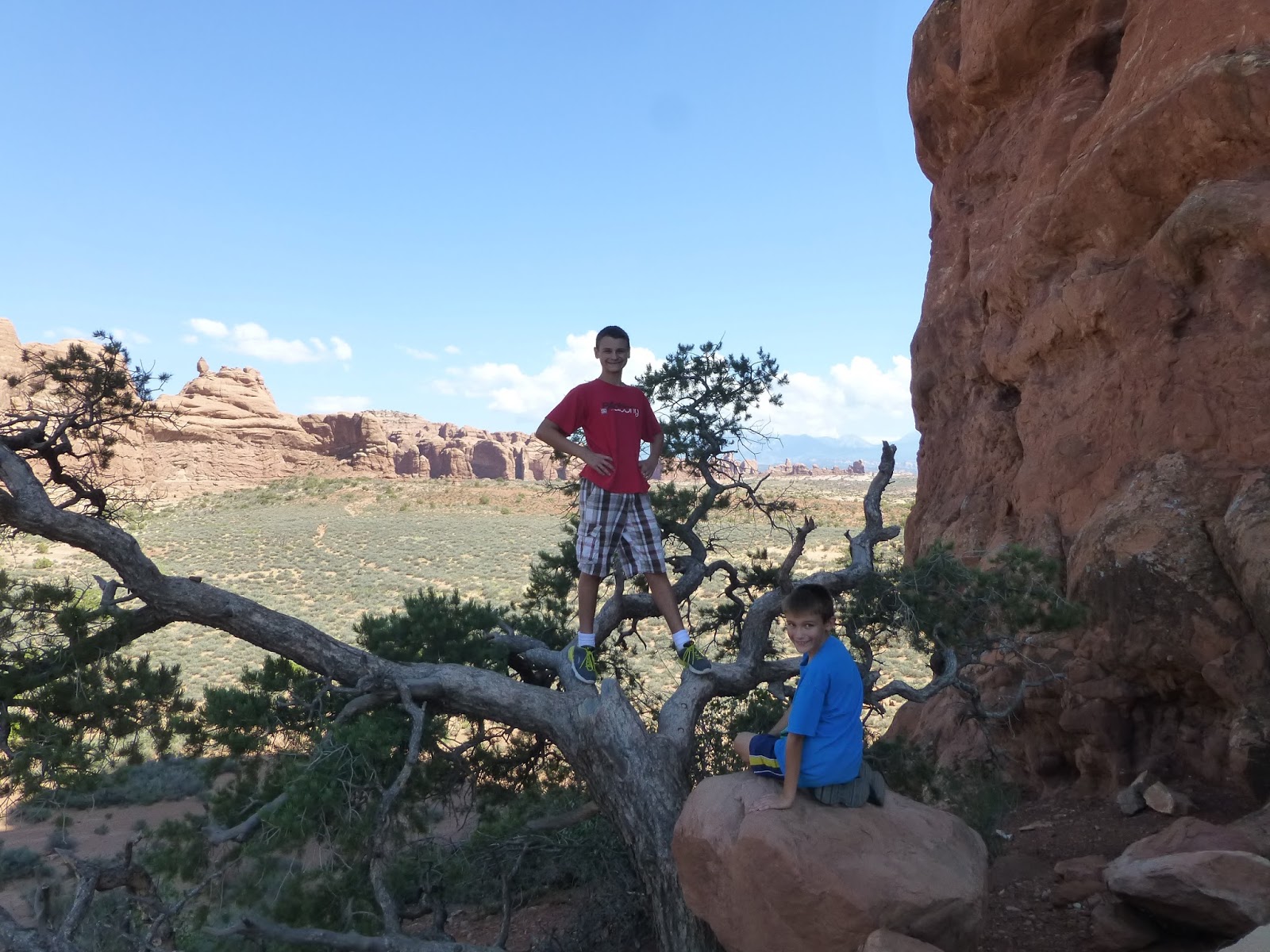 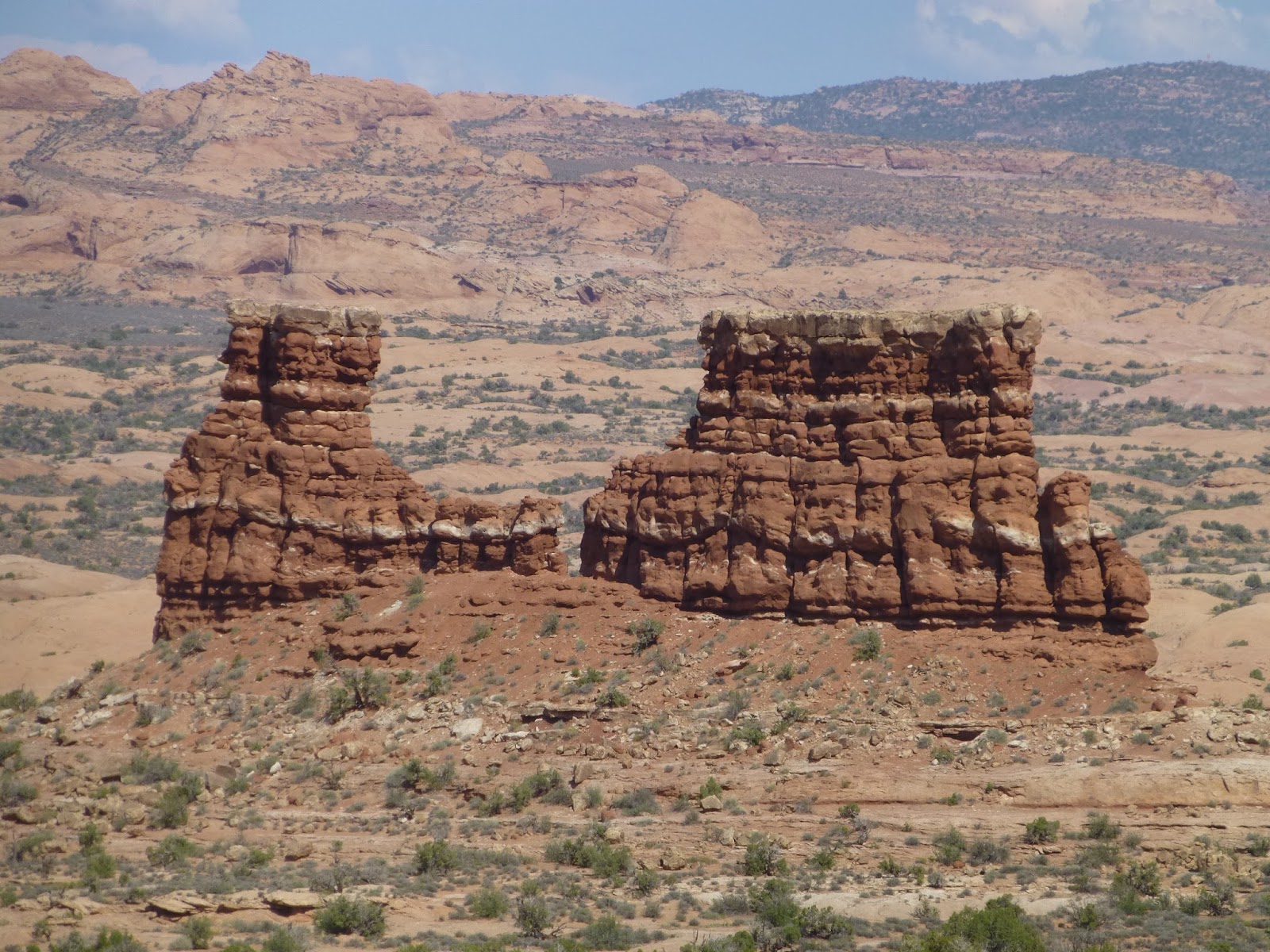 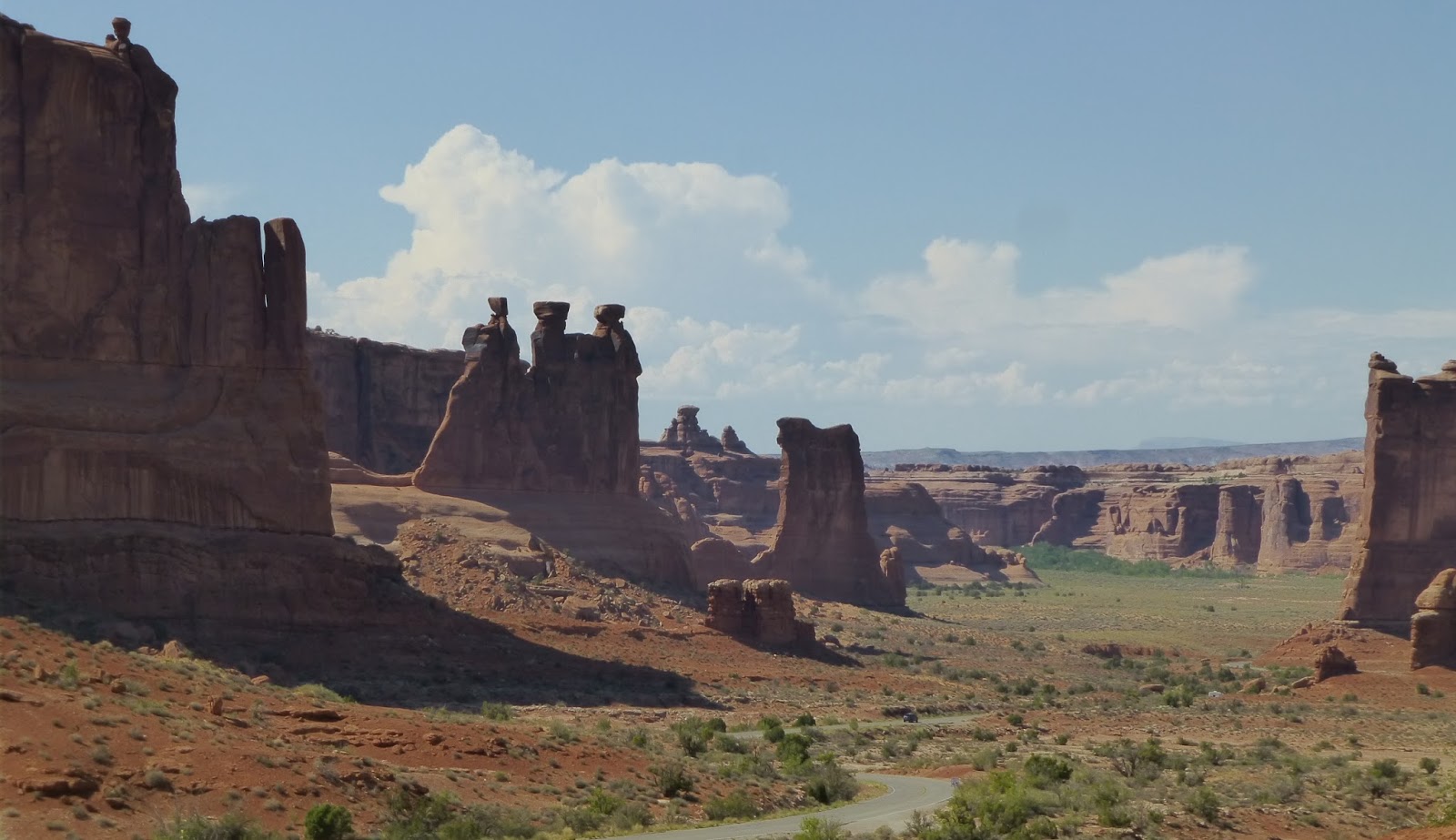 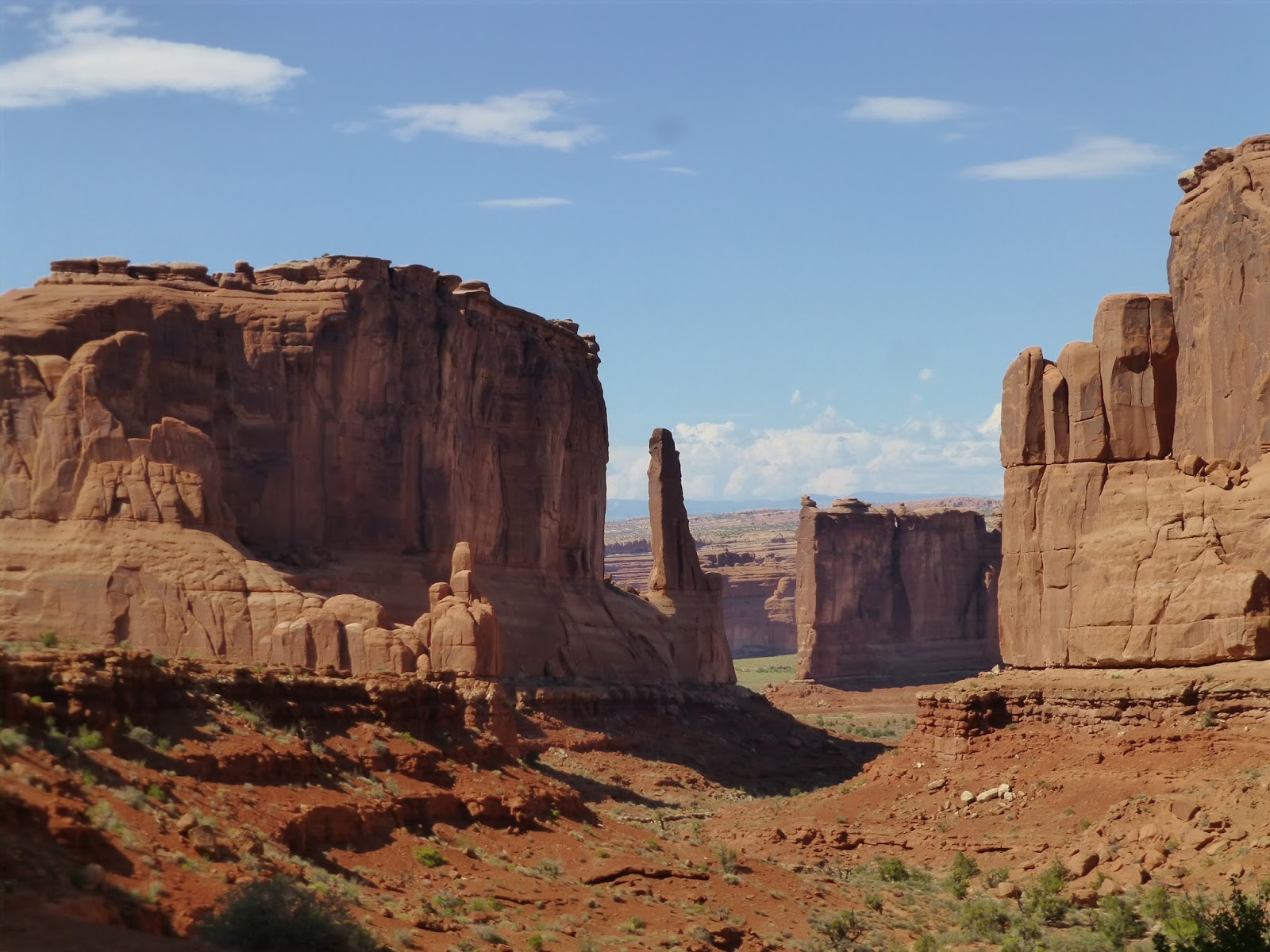 We drove back into Moab thinking we might take a drive into a canyon that follows the Colorado River, but there was road construction there and so we bypassed the area and headed back into town where we stopped at a diner for ice cream. Most of us got shakes which were huge and incredibly refreshing. Sky chose a double cone, side by side scoops. We were some pretty happy campers as we headed back to the trailer to relax for the rest of the day.