Today we had our hot cereal breakfast which no one was very excited about, but filled our bellies as necessary. After breakfast, Anne and I got our showers and sat down to get the meal plan and shopping list figured out.
By the time we were ready to leave for shopping, it was close to lunch, but we just left a couple snack ideas and took Brighton with us and headed in to town to the Walmart.

We got the groceries picked out and looked for some more camping chairs since we always seem to feel like we're short on them. Walmart's selection of camping chairs wasn't very good so we ended up going next door to the Home Depot and picking some up. They were cheaply made, but at least the price matched. ;o) We also found some lighter fluid to aid us in our fire making with the wet wood.

When we left Home Depot, there was a smoking car in the parking lot as if it's engine was on fire and we could hear the sirens on their way. There was a definite serious smell to the smoke in the air. We managed to get out of the parking lot with no trouble at all, but in my imagination we would have been blocked by the firetrucks coming to put out the fire.

While we were gone, Brock and Keith took the kids to play on a life size chess board and some bolo toss on the camp grounds. 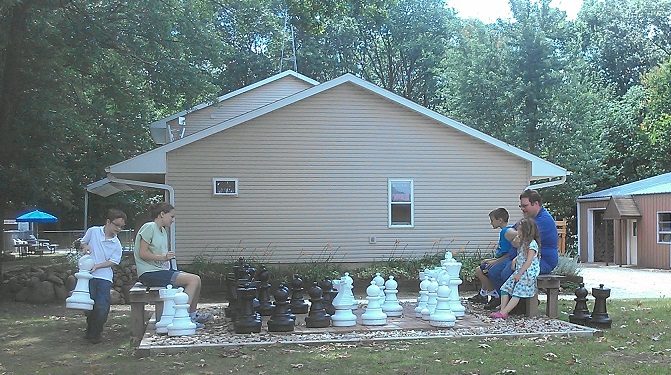 Once we were back and got all the groceries put away, it was time to begin our dinner. Tonight's meal was from the Coleman recipe page and was called hobo hamburgers. It is a foil packet dinner in which you put a hamburger patty and some veggies with some butter and seasonings and wrap it up and cook it on the coals of the campfire. Thankfully, with the lighter fluid, tonight's fire got going much faster than the last. When the coals were ready, we strategically placed all our packets down in the ring and made a little map to keep track of who's was who's; we then set a timer for 45 minutes.

For the most part, everyone was pleasantly surprised at the yummy flavor of the hobo hamburgers, but I think there were also at least two peanut butter sandwiches consumed instead. It was fun to try something new.

We all made more s'mores and sat around the fire before a fairly early bed time.