Sky Gets a New Accessory

Skylar had a great night's sleep last night. Part of that might have been attributed to codeine, but not all. He only had a dose around 11 pm and then he slept until about 8:30 in the morning. Even that was just to open his eyes and look around and then go back to sleep until about 10:30! He was up and around for over an hour before coming with the pale look on his face saying that it hurt. I figured with his appointment at the ortho clinic at 12:45 today, he probably should have a dose in him so he took one around 11:30 and that was the last dose he took for the day.

At the clinic, we filled out the new patient forms and they got Sky's vitals all noted down. They then took him into the x-ray room to get a picture of what the bones look like in his cast. Brock and I waited in the casting room. Sky came into the room and climbed up on the exam table. The orthopedic surgeon came in and showed us the x-ray. His assessment was that the bones hadn't moved from where he'd set them so he thought Sky would do great. He asked us how blue his fingers had turned, trying to determine if the cast had enough room to accommodate swelling. Since they hadn't turned very blue, all we needed was the fiberglass layer on the plaster cast which was already in place. Skylar will wear that heavy contraption for the next 5 weeks, which will be until after we arrive back in Bend. We will see an ortho doctor in Bend to get the cast removed, a new x-ray, and see if Sky will need a short cast for a couple more weeks after that. The doc gave us some cast care instructions, arranged to have everything printed out for us to give to the doctors back home, and bid us farewell. Then a nurse came in and did the fiberglass cast. Sky wanted hunter orange, but got his second choice which was bright green. 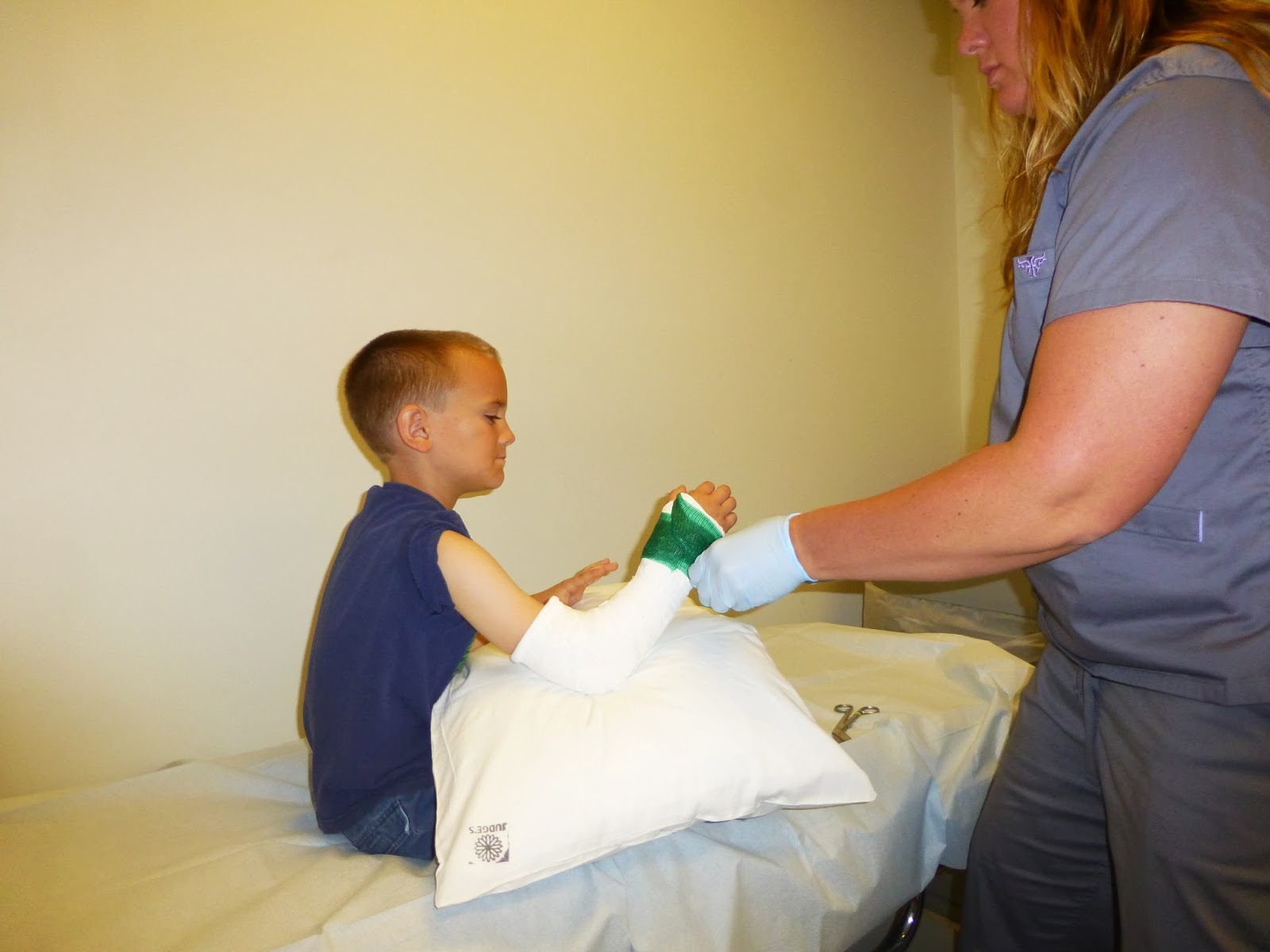 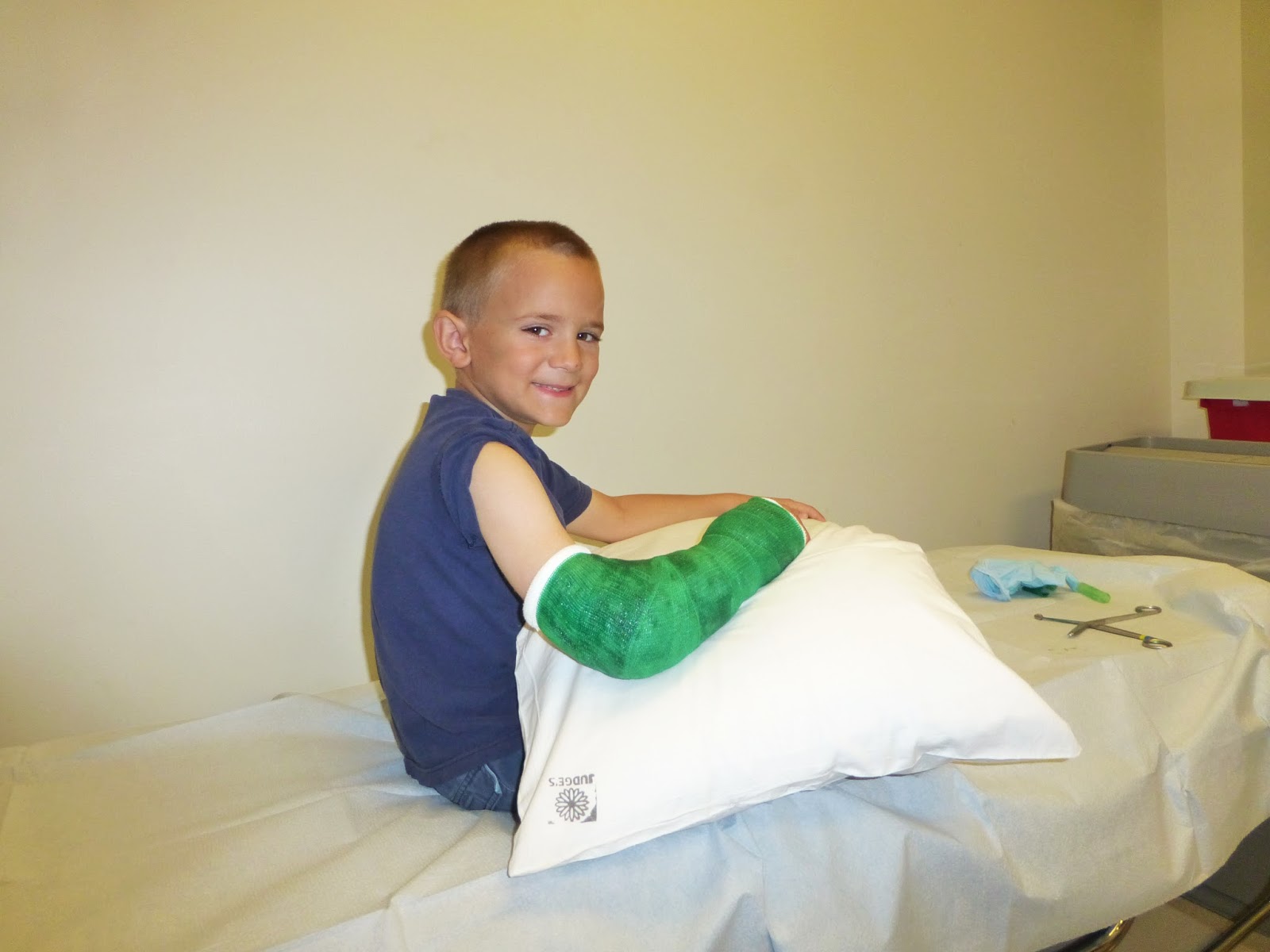 The cast is so heavy, Sky prefers to keep the sling on to help him hold it up.

We offered to take Sky out for lunch to celebrate, but when he said he felt like grilled cheese, we decided to just go home and make it ourselves since we were planning to go out for dinner already.

When we got to the Moses house, Caleb had already got the griddle going and orchestrated lunch for us which was very nice. Sky didn't think he was hungry, but he ended up finishing all, but about one bite of his sandwich so that's a testament to Caleb's skills.

Brock had quite a bit of work to get done so he got on that while the kids played. In the late afternoon, Spence and Sky found that the Moses family had Despicable Me in their movie library so they got that started. Rimon came home to take Sam to his soccer game and eventually everyone who was here at the house piled into our Yukon to drive to the restaurant where the HTG guys were going to have dinner. Rimon was there and met Brock. We met up with Anne Schoolcraft and her kids, Walter and Abigail. Keith Schoolcraft would be attending the meeting with the guys. Lisa and Sam met us in the parking lot and we piled back into our two cars and caravan'd to Polito's Pizza in downtown Wausau. We ate some really good pizza. They have lots of unique flavors so it's fun to order by the slice so everyone can try what they want. The slices were huge, but apparently all the kids were hungrier than we estimated and we ended up going back for more for everyone.
After dinner, Brynna, Sky and I took Anne and the kids back to their hotel and our boys went with Lisa back to the house. After dropping off the Schoolcrafts, we stopped at Walgreens to pick up some fancy permanent markers for Sky to get some cool signatures on his cast. (He chose metallic silver, gold and bronze which will all look great against the green.)

When we got home, most of us had a little dish of rainbow sherbet and I could tell Sky was really ready for bed. He was drooping. It was about 9:45 and Brock and Rimon weren't back from their dinner yet. I helped Sky brush his teeth and use the bathroom and we headed out to the trailer for bed.
Posted by Unknown at 11:38 AM